I will not be responsible for any material that is found on this site or at the end of links that I may post on this blog site. Mistakes may happen from time to time. URLS and domains may change hands. If you need financial advice or someone to hold your hand while you make the trade, please find another site.

Because the information on this blog are based on my personal opinion and gosh I am so fucking opinionated, it should NOT be considered professional financial investment advice. The ideas and strategies should never be used without first assessing your own personal and financial situation, or without consulting a financial professional, preferably both and in that order. My thoughts and opinions will also change from time to time as I learn and accumulate more knowledge,or my meds wear out, or my post coital euphoria passes.

Feel free to comment on my ideas or ask questions in the comments section for the blog entries. Please remember that this is a blog, and you do not need to agree with everything or anything I write (except I am very needy when it comes to my looks...so you have to say nice things). I reserve the right to delete any comment for any reason (abusive, profane, rude, etc.) so please keep the comments polite, unless you are criticising Gold Bugs...in which case go wild....doggie style.

This site is also dedicated to preventing small traders from having their accounts go supernova by listening to Gary Savage. To read more about him, please browse through the posts and also see http://smartmoneytrackerpremium-exposed.com/

The real returns of Gary Savage

It is truly a wonder that in this age of search engines, people are still, still subscribing that to that idiot.

Or maybe it is because he lacks them (subscribers) that he makes desperate comments like these.

Gary bought, JNUG and NUGT and repeatedly told his subs NOT TO SELL and then terminated the model portfolio ON A HOLIDAY. 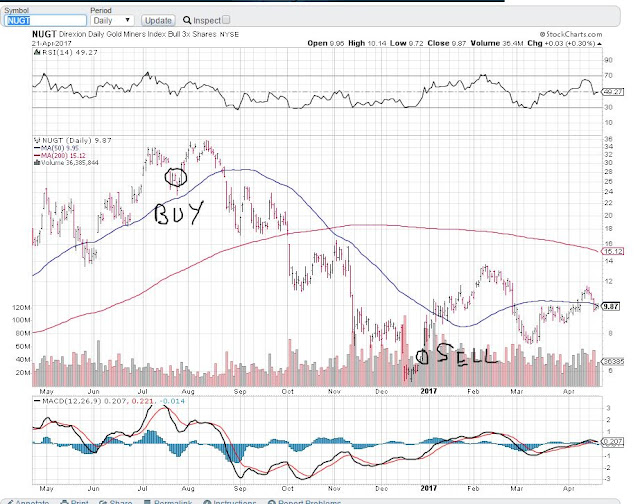 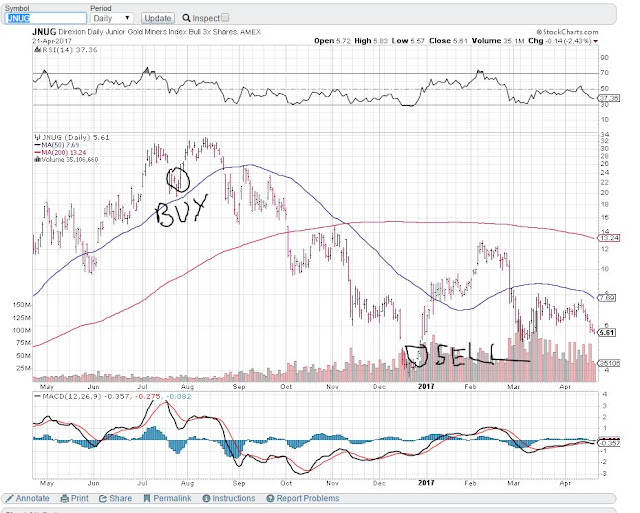 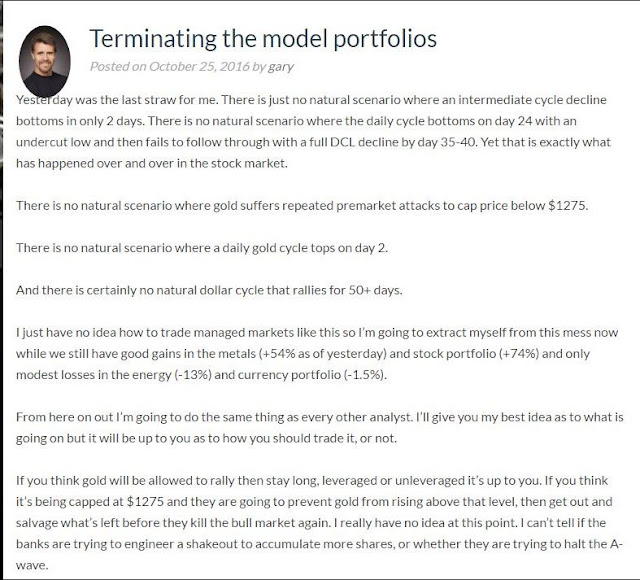 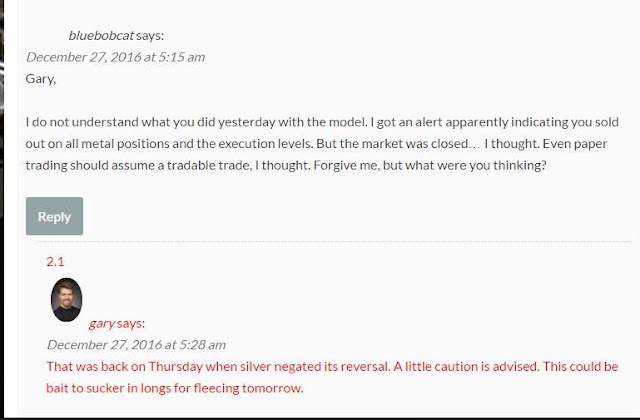 Yet that is the exact time he restarted his portfolio which he claims is up 154% today!
Wow a clean slate.

Below is his spreadsheet. He has no open trades so this is all past information. I am not disclosing his "trade secrets", although If I were to guess his trade secrets they probably would read something like
a) Come up with 15 trading rules.
b) Ignore them at every chance you get.
c) Criticize all my subs for doing the same.
d) Blame every failed trade on the bankers.

Note he started with a round number of $150,000. So Gary is implying...based on his final number that all his trades before that had a nice exact plus 50% return. 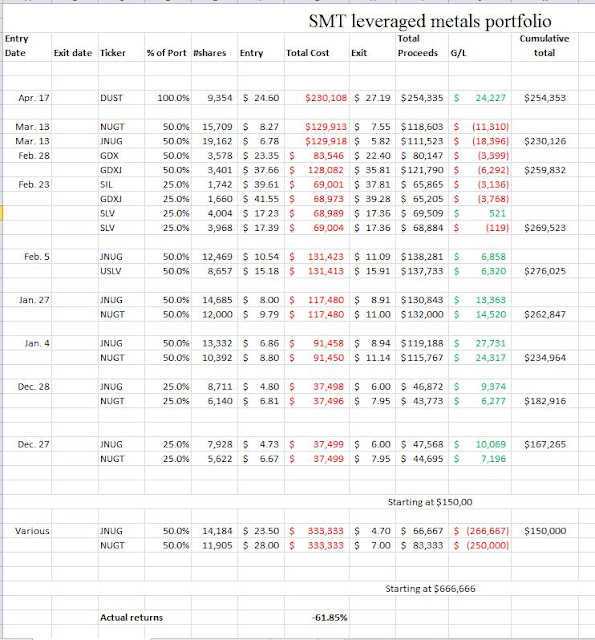 So I added one more thing at the bottom. We have ample evidence that he bought NUGT and JNUG in July and closed them in late December. I used some basic math to figure

I shit you not….his starting portfolio would have to be
$666,666.
If you ever needed a divine sign not to listen to this moron please use this.

Sidebar: I recently watched “The Omen” and it was fucking awesome!!!!!!! 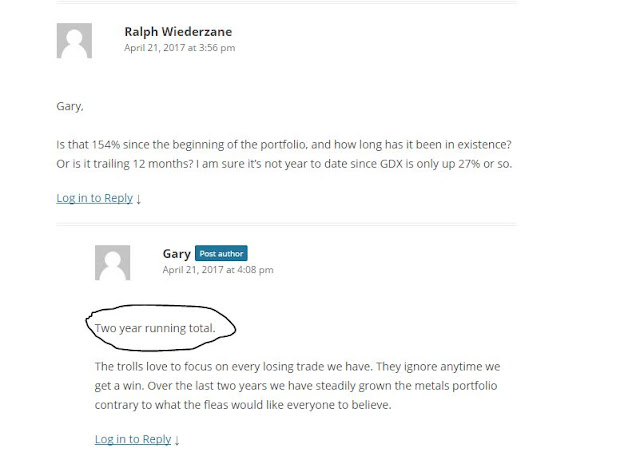 Two year running total? You just left out your biggest disaster and your spreadsheet starts 4 months back you fuckwad!!

Gary such level of deception should get you in Jail. I am not kidding bro. Deletion of such facts and awful repeated lying and misrepresentation is not covered under your “Gary Savage LLC is not responsible” bullshit clauses.
Posted by The Duck That Rocks at 10:16 PM No comments: Links to this post

Yep he has gone short the Precious Metal sector.

While, I personally think he has a fair chance of making money on this ( I am currently short NUGT), the splendid irony of this Dickwad’s constant contradictions is permeating through his subscriber base.

Yeah Ralph but what you are saying only makes sense if you have at least a high double digit IQ. But don't worry. Gary is right behind the banksters bottoms. 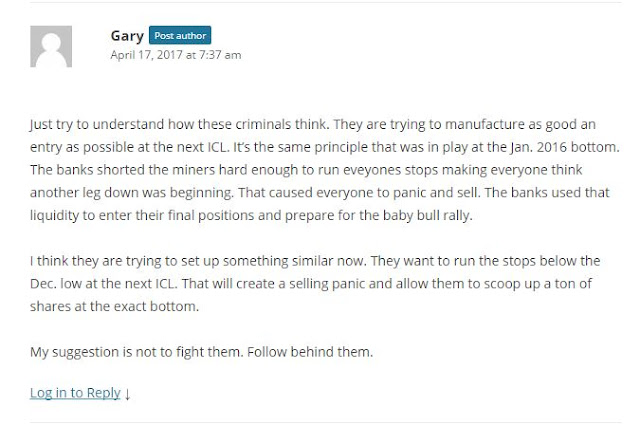 And in the rare chance you blame Gary for this short trade gone bad....Please view the other side of the mouth talking. 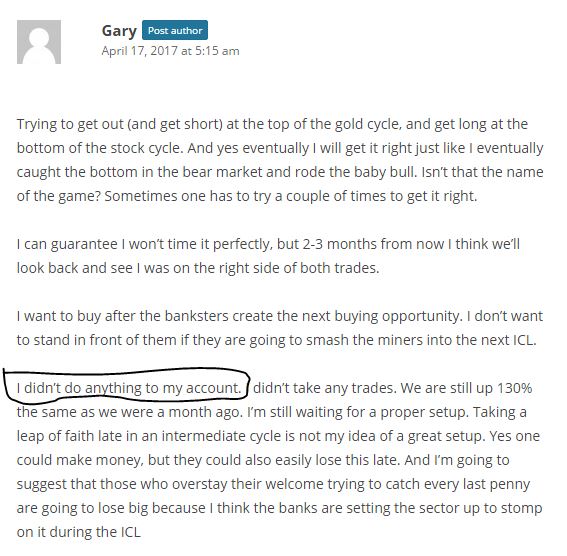 So remember, Gary is always right. He always makes money. Why else would he begging for $500 annual subscription fees? True sign of a millionaire. 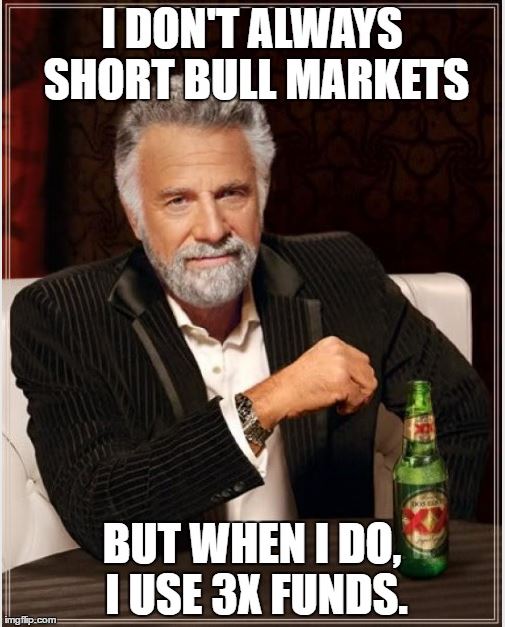 Posted by The Duck That Rocks at 11:32 AM No comments: Links to this post

Baby Bull: How one man spotted 60 of the last zero bull markets: Part 6

Parts 1-5 can be read through the archives.


I mean where else can you get a service that helps you lose money in every fucking asset class?
So after a few trades, that ended in a net loss (Gary alludes to this himself in the first line), Gary tried his luck again in ERX the 3X leveraged energy fund in 2015. 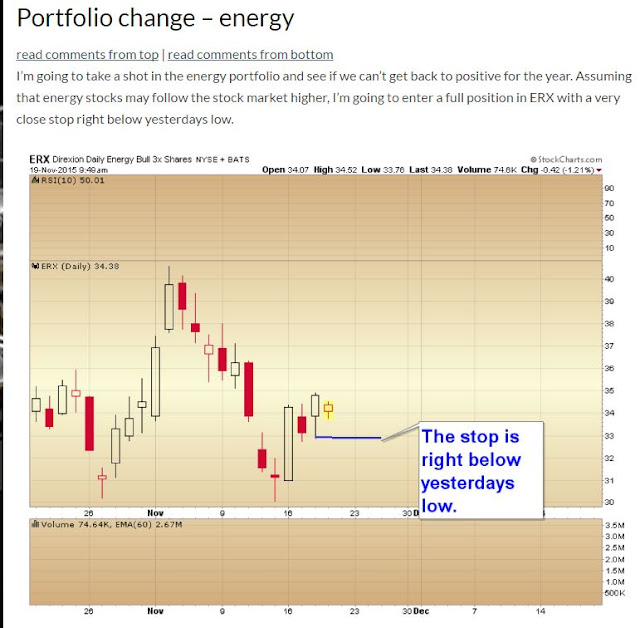 Adding that he was going to be pissed....
Fuck even before he could complete that thought....
Less than 1 hour later! 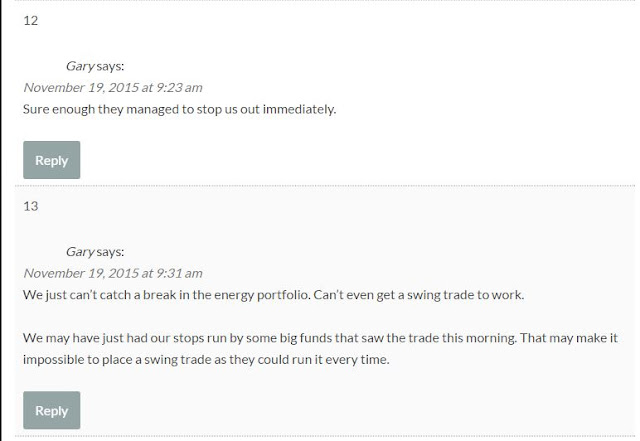 Those damn bankers!!!!!!!!!!!!
Working overtime to cause Gary to lose money. I mean seriously, if all these multimillionaires who run the world, don't spend every waking minute spoiling Gary's trades, how will they ever get satisfaction?

He was not going to be stopped out now.
Sidebar: "Nothing's gonna stop us out now." A lesser known Starship Song. 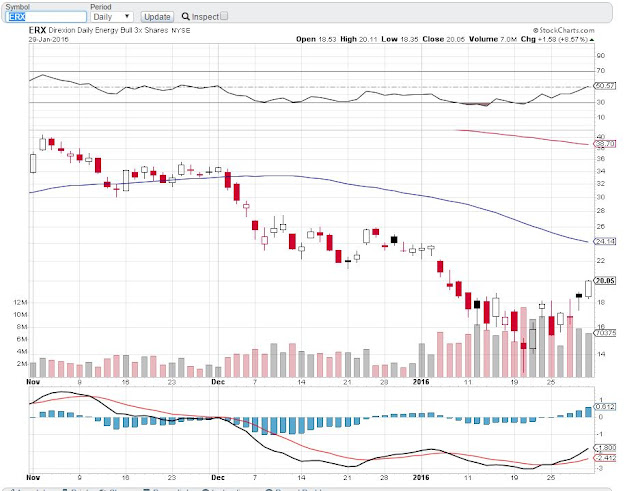 Just in time for a nice smooth 60% decline.
But on Jan 6th with ERX around $20, down about 40% from Gary;s buy point....
Gary Majestically added

"It's too early to buy ERX". The irony was not lost on one subscriber. 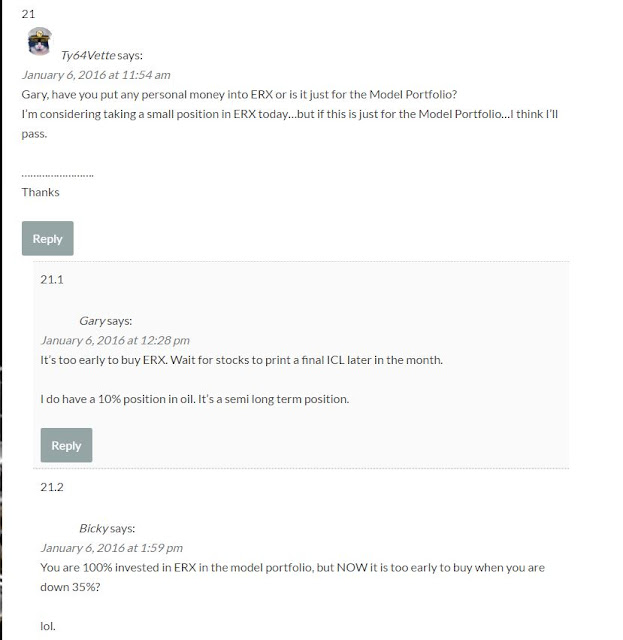 But Gary was strong. Gary took the opportunity of a 50% drawdown to reiterate that he only sells at intermediate tops. 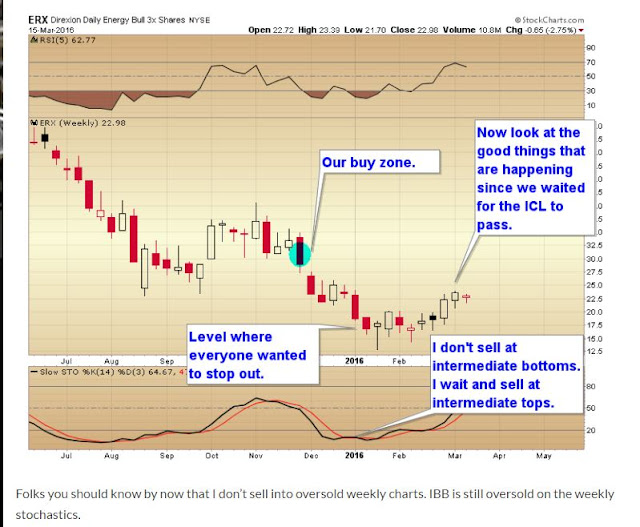 Gary hung around on this till a whole 9 months later when..he finally took a loss.
To his credit it was a smaller loss than we would have expected. But still his "Energy portfolio was down 30% assuming Gary knew any math. 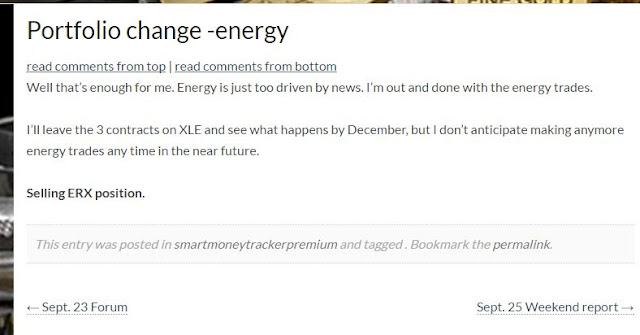 Which brings us full circle to his current trade, where Gary took the opportunity to remind us common folks, what we were missing out by NOT having a subscription. 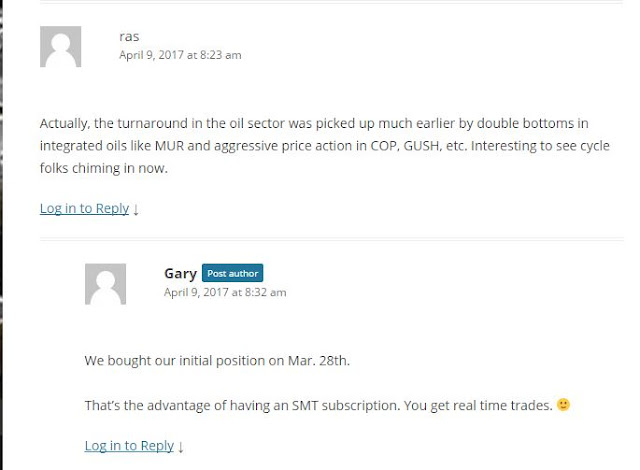 Posted by The Duck That Rocks at 10:56 AM No comments: Links to this post

So what is happening is

"You did not enjoy that awesome 85% loss on JNUG which I closed out on the weekend? No? Ok, how about I make it better for you by jacking up the price by 150%. How does that sound? And just for good fun I will throw in the Quest portfolio which ALSO goes to zero over the next 3 months. How does that sound? We cool?
Great! "

A few weeks later
"I have since then got everything wrong (including the math on how portfolio returns should be calculated), so let me lower the price by $100. How does THAT sound?"

I have been in communication with Gary and coaxed him to improve his offer.
I suggested he keep the price $400 for a one year membership.
However,
If it loses money, he pays you $400 back and an additional $400 of his own money. Since he is a millionaire and I am thinking less than 1 in Billion are stupid enough to fall for this gimmick at this point with SMT-exposed and me running at full steam, at most he will be out $2,800.

To qualify for this, enter any of the codes below when you subscribe

If the code don't fit, just lube the sides and try again...gently.
Posted by The Duck That Rocks at 4:10 PM No comments: Links to this post